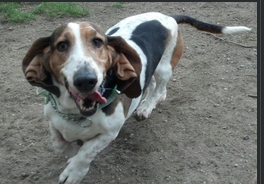 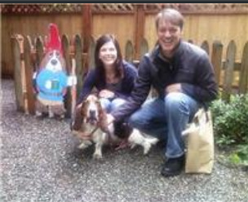 Miles Davis
The dog with many names, Odie,  Beau, Rocky, BooBoo and Boomer.  This super skinny rock eating surgery getting Basset is in his forever home now.  He has steadily gained weight and when this happy couple came to see him he lit up tail wagging and wiggling with joy.  This family had lost their old Basset Satchmo and were ready to open their hearts and homes to a new dog.
One more name for this this young dog he will now be called Miles Davis and rule the roost at his new home.
Thanks to all who helped and this boy and his forever family are forever                                                         indebted to your kindness! 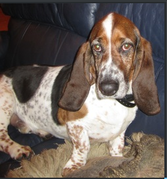 Flash new name Buzzcut
Flash and his brother have found their happy homes together. 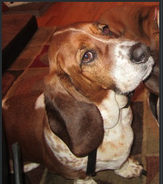 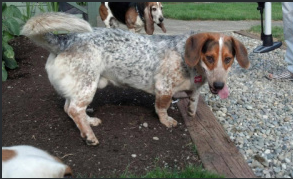 Casper
Casper is a Basset/Blue Heeler mix and is only 1yr old. He came to us from Spokane Humane Society. His owner had moved to Spokane to a better life then she had in Oregon. Yet it is was not to be, she lost her home and had to give her animal friends up. 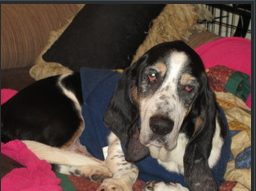 Sherlock
This wonderful 8 yr old wanted to find someone who would let him find clues and now he has a wonderful new family. 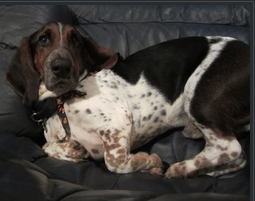 Wally
This young energetic boy is only 3 1/2yr. His owner passed away and the family was unprepared to care for a basset. He is playful and very sweet yet he is a basset with all of the quirks that go along with the breed.
Wally has found his Happy Home! 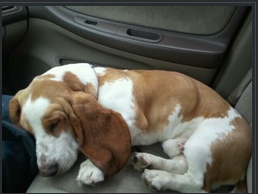 Rusty
Rusty came to BROPS at age 1 having lived in 4 homes before we got him. He has now found his forever home. 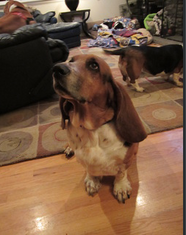 Kielbasa
At 8 yrs of age I have been in more homes than I can count and am looking for a forever home.
Kielbasa has found his Happy Home.

Beezy
A sweet little one and a half yr old has found her Happy Home. 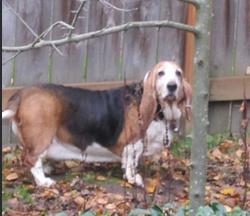 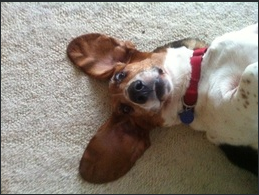 Penelope aka Penny
Penelope was adopted by a big supporter of BROPS. She is now the spokesdog for our Facebook Page 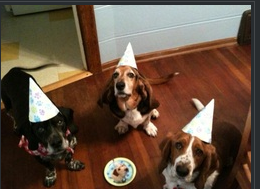 Elvis
Elvis has found a forever home. He joined a well-seasoned basset house hold. Where dog beds have the premium spots in the house and more squeak toys then Elvis knows what to do with.

Lucy
Lucy has found  her best man in Olympia, she even has her own pillow what a lucky lady. 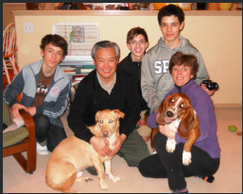 Ginger
Ginger found her happy home with a pediatrician and his family in Seattle.  She has a corgi mix brother to run and play with and lots of family members to keep her active,  she is in heaven! 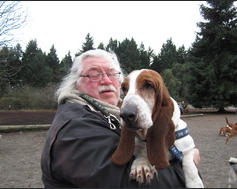 Noah
Noah has found the home he always deserved. His foster parents have failed foster 101. They have given this scared puppy mill boy a home where he has fellow bassets and a labradoodle to show him how to be a part of a family. He has attached himself to his dad and follows him around everywhere.. 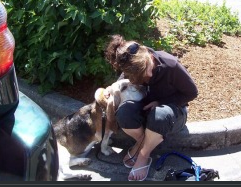 Charlie
Charlie was a wandering dog, he was older and had been living on the streets for many years.  That didn't stop him from being able to find a perfect forever home with Liz all the way in Canada on Vancouver Island.  Charlie is living it up with a yard of his own and a perfect loving mom that is working hard on potty training a 10 year old dog and feeding him anything his little heart desires.  YAY Charlie what a success story! 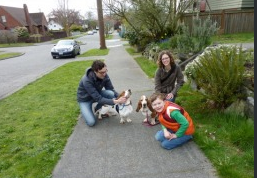 Horton now Stanley
When Horton's (now Stanley)new family came to meet the dogs, they fell in love with two bassets and decided to open up their home to both a young dog and an older girl.  These dogs will have lots of walks time at the dog park and a great couch to cuddle up on. 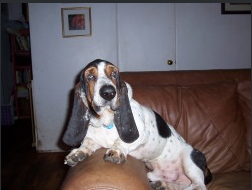 Chopper
Chopper has a great new family that is willing and able to deal with all his health problems, they have a wonderful vet.  His new family still comes to rescue to pet the other bassets and is looking forward to
Fun Day this year. 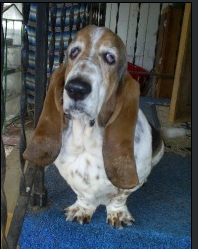 Sara Sue
Sara Sue, also known as Sassy Sara Suzy.  She loves to play.  Play play play all day long!  She has more energy than Hal, & she's 8 1/2 yrs old!  She's had some incontinence issues, but we seem to have that taken care of now.  She will sit in the yard for hours watching for squirrels.  She's very loving & has a bionic wag.  She loves any toy that squeaks & will bite it until it no longer squeaks.  This usually takes only a couple of minutes, so I keep lots of squeaky balls around.  She's totally in charge of the boys (& she's the smallest!).  She takes the toys & hoards them.  If she wants to play she will pester Hal until he runs so she can chase him.  She loves to bite the front of your pant legs or untie your shoelaces while you are walking!  She loves going in the car & barking at motorcycles & other dogs. 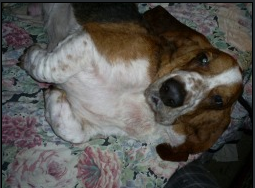 Hal
OH!  I'm SO glad you rescued Hal.  He has kept that name, Hal E. Bear is his full name.  Sometimes Hal E. Gator because of the way he sometimes takes treats.  (Although sometimes I call him Linus because he drags blankets & towels all over the house.)  He goes in for acupuncture every other week & that has helped with all the itchiness & hair loss.  He had demodectic mange & we finally got our first negative skin test last week.  He goes back to the vet next week & we are hoping for another negative test to show we've completely gotten rid of the mites.  If no mites then he gets to start coming off some of the medicines.  He still has very thin hair, but he's got all of it!  He likes to go places, but gets car sick, so has to have dramamine.  He loves toys & playing with Sara Sue & Spencer/Harry.  Now that he feels good he acts like a puppy, all running & jumping & elbows & angles!  Everywhere he goes people love on him & tell him how beautiful he is.  He's a very happy boy.  Not a day goes by that I don't tell him how happy I am that he's here.  Hal & Sara went up to the Veterinary Assistant program at Renton College to help the student by being practice dogs.  They had a great time & were a benefit to the students.  We may even do it again next year! Spencer (Harry on the "happy homes" page) is a big fuzzy boy.  he grew in the most luxurious coat & in the winter its curly.  He has some serious behavior issues.  The only way he knew to deal with life was to bite, but he's slowly learned that life is pretty darn good here.  With the help of a behavior consultant & LOTS of patience (and treats!) Spencer is a pretty good boy, but will always be a work in progress.  He's come SO far.  We have regular places where we go & they know the history of these dogs & help to socialize them.  Spencer has some arthritis issues & getting that under control has helped his attitude immensely.  He was also diagnosed with very low thyroid & eye problems & takes daily meds.  Getting him feeling better was a huge step toward making him a better boy.  Spencer likes to play with Hal, but he's respectful of Sara because she's bossy.  He lets me love on him & hug him, he's learned that I won't hurt him.  I'm hoping to have him ready for his social debut at this years Howloween party. 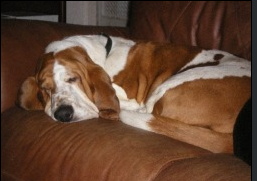 Spencer now Harry
Harry wasn't really given a chance in his original home.  He did have some aggression issues because his parents were always fighting and hitting and the kids at his home were not taught to respect dogs.  When he came to rescue we were not sure he could ever find a new home due to these issues.  With a lot of work we were able to give this dog a second chance with a new owner that already had worked through a fearful aggressive basset hounds issues and we were sure would be able to keep Harry and all people safe.  YAY another success story! 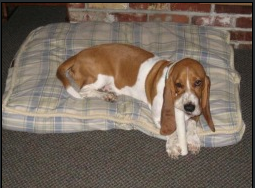 Lenny and Danny
When this family came to see the dogs they fell for two, instead of choosing between these beautiful older boys they opened their home up to both.  Lenny and Danny will have each others company and lots of love from their new mom and dad. 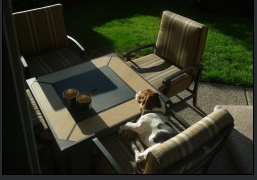 Fred
Fred in his new forever home, he had to be placed twice because he never got to be part of a family before he was a puppy mill dog.  Direct quote from his new owner " --no more puppy mills in Fred's future he's got the good life now LOL." 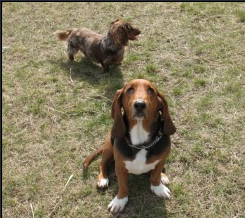 Alice
Alice playing at the dog park, she gets to be the one and only dog at her forever home.  In the background is her cousin Daisy - her parents daughters dog.  She will have her new family to herself and get lots of love and training in Port Orchard. Now she can be the Princess she was meant to be!! 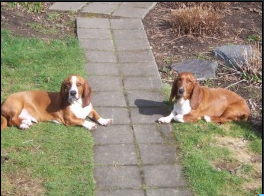 Annie
Went to a loving home in south Seattle. 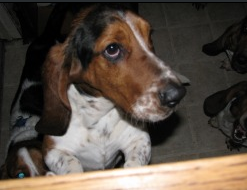 BO
Bo found a great new home in the South End with a Basset Savvy family.  This will be a great second chance at a forever home.  His new family is willing to continue his training and have a great support system for such a rambunctious boy. 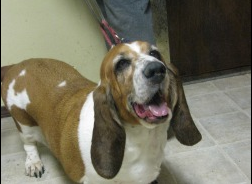 Jasper
After a long wait and a really strict diet Jasper has found his new forever home.  He will be loved, but not with waffles and other treats in his new home. 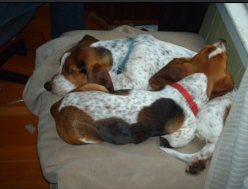