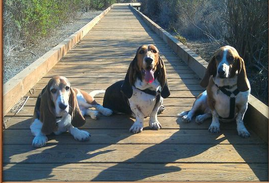 If you would like to donate in memory of your dog just click the donate button.
​ To have a picture and a write up please send via email to bassetrescueofpugetsound@gmail.com 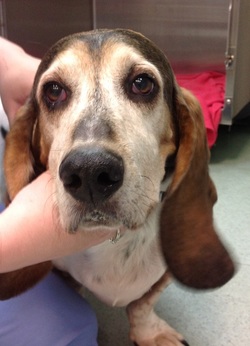 ​
Chance was taken in by our good clients, the Kane's, when he was 3 years old. At the time they had a 7 month old Basset Hound, named Phoebe and had wanted to get a playmate for Phoebe. Chance's previous owners could no longer handle his allergy issues - both food and airborne allergies. For years Chance battled secondary skin & ear issues from these allergies and also pancreatitis flare ups. His human parents were always on top of his medical care and had been willing to do all medical recommendations made by us. As time went on, the Kane's adopted an approximately 5 year old Basset that had been tied up to our picnic table out back of our clinic. They named her Lilly and it was always fun when the whole brood would come in for visits - the Kane's would often just stop by the clinic with the pups just to say hi. Chance had that kind of personality that would always stand out of the rest of the pack - he made sure to announce his entrance every time he came to clinic with that typical Basset Hound howl and the staff always made sure to get up to the lobby to greet him as soon as possible. He was just one happy hound all the time. About 1 1/2 years ago the Kane's moved to Ireland - this is something they had talked about doing for years. They worried about the stress of the travel since all three of their pups were geriatric. They hired a company to handle all of the travel arrangements for the pups and in March 2015 they left for Ireland. After a couple of weeks, we heard from them and all was good. At Christmas time 2015, we received another email with nothing but glowing reviews of how life was going in Ireland. Apparently all of Chance's allergies had resolved while living there and everyone was happy and healthy. At the age of 13 years, Chance passed away. The owners did not explain what happened, only that he had passed over the Rainbow Bridge.
​