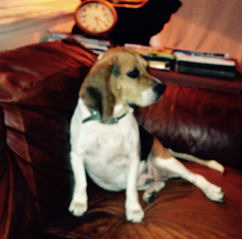 Maggie
We were told she was a Basset, but when we arrived to pick up this darling little girl, we found a Beagle. She is a wonderful little dog.  Just hilarious the way she acts is like a Basset,  she lays around on her back with a big smile.  She is very mellow and funny.  She is 6 years old and her name is Maggie. Found her happy home with her own little person 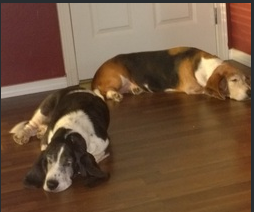 Oreo
How-a-Ween 2013 Missy met the family of her dreams. A Basset brother and a Bloodhound brother plus a couple of teenage humans.  A year went by and the family decided that the more the merrier. So Oreo joined the happy clan early Oct. 2014. 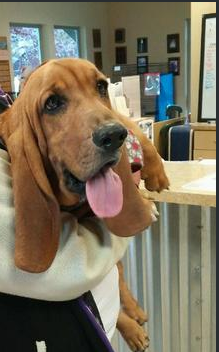 In the past Chewie"s family (before the 3 kids started arriving) adopted several rescue hounds. When their last sweet old Beagle died the family started wanting a dog for the kids now that they were older. They waited and waited for a younger Basset to come along in the rescue, Chewie came along and he is just right!

Chewie was a loved little Basset in his previous home. His guardian was a truck driver and "Ronald" went along in the truck. When the trucking company changed and dogs could no longer come along Ronald came into our rescue program (sadly for his owner who really loved him)

Chewie is a delightful totally loved houndy and he will stay that way with his new family. 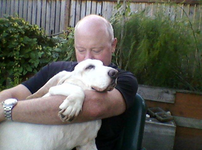 Rosemary
14 yrs is not old for her. She rules her kingdom like any Queen should.  Her last home had her for 12 yrs before they decided they no longer had time for her.  Rose will go for walks everyday and hide her cookies when she is done.    Rose found a wonderful home to live out her Golden Years !!

Rockstar
A wonderful couple (who for years has helped not only BROPS but several Rescues ) adopted him into their loving home.
They were not at all fazed by the unknowns of his adoption, and the known’s of expenses and a couple behavioral troubles - like chewing DOORKNOBS!
He plays like a puppy with "Lucy" and now is "Owned by his Basset"

SAMMIE LOU
Is now "Annie" and is a forever foster and lives with her new mom Beth. She has several pink collars and a fancy blingy pink ID tag. She gets to go on 3  walks a day . What a lucky girl. 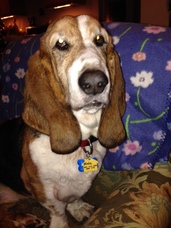 DIXIE
Dixie has a new home! It all started at the Howloween Party when a family - dad, mom, three kids, and a hound dog – met up with Dixie. The two dogs immediately became pals and the rest of the family joined in the fun. After an afternoon of frolicking at the party, there was no doubt they all belonged together. Dixie has found her happy home out in the country near Lake Stevens. 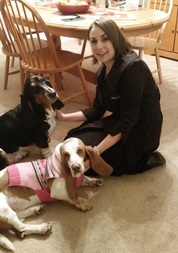 It took a lot of TLC from a number of people to get her back on her feet and gaining weight.

Then Jodie and Kurt found her at the Howl-o-ween Party and it was love at first sight. She has gone home with them and is joined by her new basset brother Griffey. When not on multiple walks during the day, Bella and Griffey are either playing or taking a nap. Jodie and Kurt report that Bella has become a member of the family and a joy to have in their home. 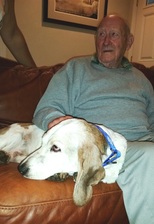 MAX
Today, Max the basset got to meet Lew. Lew had lost his beagle companion a few months ago and didn't think he wanted another dog at his age (92). But living alone he missed the companionship. Lew has a fantastic support group in his neighborhood so Basset Rescue decided that we could do a senior to senior adoption.

Max was our choice for him.

We couldn't have asked for a better match. Max was drawn to Lew right away. Once Max was on the couch with Lew neither wanted to move.